Essence of Democracy. Part I. Democracy is not a curse

In mid 1990s the word “democracy” has started causing a fair sense of rejection to the majority of labourers living in the territory of the former USSR. The reason is the total destruction that came with the collapse of the Soviet Union – destruction in all fields of live of ordinary people (employment, healthcare, science, culture, security etc.), as well as the idle talk of the new politicians, so called “democrats”, who are accompanying this destruction. “Democrats” call this creeping agony a temporary necessary fee on the country’s way towards democracy of American type. And the democracy of American type is declared to be the highest form of justice in the world. So called “democracy” has been being built in the countries that once made up the Sovied Union for 25 years, though the desired fruit of this construction is not in sight. Thus, the words “democrat” and “democracy” have become a curse. Among the people, these words are associated with bourgeois politicians, unrestrained lies, oppression and systematic robbery, unfulfilled promises. Even a simple thought about these politicians brings a sense of hopelessness and doom to an ordinary person.

Some forms of feudal democracy (power of the landlords over the peasants) are also known, for example in the Novgorod Republic, but democracy is less typical for feudalism.

Note, before the emergence of slavery (that is, before the first division of society into classes), no one thought about democracy at all – such concept could not even exist, because there were no power that would be concentrated in the hands of only part of the society – in the primitive communal society, the power belonged to everyone. Only at a certain stage of development of productive forces arose the division of labor and the power began concentrating in the hands of individual members of the community – the leaders, which further led to the division of society into two social-economic classes: the class of slaveholders and a class of slaves. Democracy as “power of the people” existed only among the slaveholders and had no relation to slaves. Thus, the term “people” meant exactly slaveholders.

With the further development of the society and the change of social-economic formations, the forms of democracy have been changing too, but its essense has remained the same – to ensure the power of the ruling class, the power that is not externally limited by any laws (including moral laws). Such power is called dictatorship. 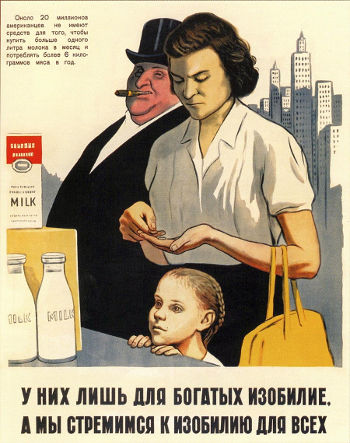 Although state authorities of the modern capitalist countries (i. e. Germany, USA, Russia and Latvia) do not miss the opportunity to remind us again and again of the Greek roots of democracy, fortunately they do not dare to proclaim slaveholding regime, and means something else when speaking about democracy. Thus, it confirms that there are different types of democracy. In general, bourgeois governments prefer not to use the scientific class theory and always use a simple phrase: “We have democracy”. Nevertheless, we must understand that under this beautiful sign lies nothing but the dictatorship of the bourgeoisie.

As Joseph Stalin wrote in his work “On the foundations of Leninism”, “democracy under capitalism is capitalist democracy, the democracy of the exploiting minority, based on the restriction of the rights of exploited majority and directed against this majority” and the entire history of the development of capitalism proves these words.

Now then, we learned that every democracy in fact represents a dictatorship of a specific social class, but as we will see, this dictatorship does not necessarily mean evil.

And what can be said about proletarian democracy, or in other words about the dictatorship of the proletariat? It is clear that the power belongs to the workers, but who is this power directed against? In the answer to this question lies the difference between the true power of the people and the democracy that bourgeois politicians impose on us. True democracy is not an instrument of exploitation of man by man, of one class by another. Proletariat does not exploit anyone and does not live at the expense of others. The working class applies its dictatorship in order to prevent the outgrow of the petty-bourgeois ambitions of individual citizens into a counter-revolution, and not to allow capitalist states to destroy socialism in the country of proletarian democracy. This dictatorship serves the interests of the entire society, as it is directed on elimination of class distinctions between people (while preserving the entire cultural and creative diversity). Proletarian democracy does not aim to make all people the same, equality is understood only in terms of the elimination of class differences between people, it is understood as a society with no exploiters and no exploited. 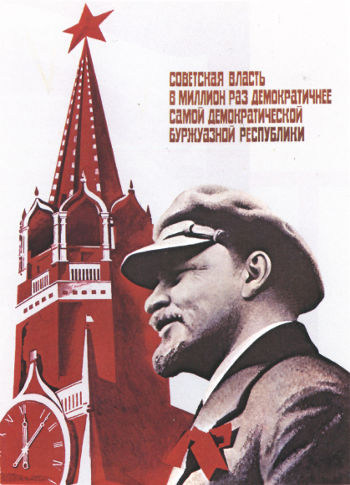 So, true democracy is not a curse, it is another name for dictatorship of the proletariat – the real power of the working people.

In the pamphlet "A Great beginning" Lenin gives the following definition of the dictatorship of the proletariat: “If we translate the Latin, scientific, historico-philosophical term “dictatorship of the proletariat” into simpler language, it means just the following: only a definite class, namely, the urban workers and the factory, industrial workers in general, is able to lead the whole mass of the working and exploited people in the struggle to throw off the yoke of capital, in actually carrying it out, in the struggle to maintain and consolidate the victory, in the work of creating the new, socialist social system and in the entire struggle for the complete abolition of classes. (Let us observe in parenthesis that the only scientific distinction between socialism and communism is that the first term implies the first stage of the new society arising out of capitalism, while the second implies the next and higher stage.)”

Democracy can not be reduced to bourgeois elections and the freedom of speech. Instead, elections under capitalism (and vast majority of people have already seen this) is a circus. Every state is a state of a certain class and that class can apply its dictatorship in various forms. Democracy is one of the forms of this dictatorship, and only with the withering away of the state withers away the dictatorship.