Time to Shorten the Working Day

For employees in Latvia, the law establishes an 8-hour working day with a 5-day working week. Such an order has been unchanged for a long time; it was introduced in the Soviet era. Since then much water has flowed under the bridge. Laws relating to social issues are changed many times. The retirement age, sickness insurance for employees, the right to trade union activities – all this, after 1991, the Latvian authorities underwent radical changes. Against this background, an 8-hour day and a 5-day week look not only unshakable, but also somewhat old-fashioned.

Undoubtedly, certain political and economic groups are thinking about changing this norm. Undoubtedly, they would like to increase working hours and reduce the number of days off. So far, they achieve this indirectly. Everyone knows that hired workers in Latvia, contrary to the current law, have to work more than 40 hours a week.

What caused the need to reduce working time?

Since the time of Latvia’s accession to the European Union, we often hear about labor productivity in our country. Labor productivity is constantly talked about, justifying low wages. Say, in rich countries the worker works more productively, and therefore his wages are higher. These statements are not supported by any calculations, but they are presented as if not employers, but employees are guilty of low labor productivity. 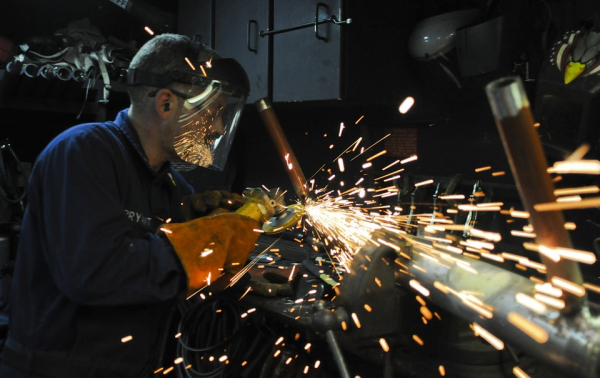 There is, however, another parameter characterizing the work of people in industrial, transport and trade enterprises – this is the intensity of labor, which is not usually talked about. But the intensity of labor (it’s also the burden on the worker) in Latvia’s private enterprises is high – higher than in the rich countries of the European Union.

This occurs, in particular, due to the combination of official duties, when an employee is forced to work literally for three. Together with the destruction of Soviet enterprises, the positions of technologists, helpers, handymen, crane operators, slingers, forklift truck drivers, storekeepers were destroyed ... All of this is “excessive luxury.” Their functions are shifted on the shoulders of the "core" staff. The worker works for three – he is both a Swedish, a reaper, and a igrets on a dude.

Frankly, excessive labor intensity leads to stress, to nervous and physical exhaustion. From such work a person does not have time to relax. Holiday today is too short. Four weeks, perhaps, would be enough for a holiday, but who gives the worker a four-week vacation? Employers are often allowed to take no more than two weeks, that is, they are forced to break the vacation into parts. Practiced sudden urgent "call" to work during the holidays. It comes to the fact that the worker can offer to take a vacation and continue to go to work.

In fact, an employee spends on work not only the time he spends in a factory, in a warehouse, or at a cash register. One should also take into account the time spent on the way to and from work, and in many cases they are also excessively large. Acceptable work is often too far from the place of residence, and the public transport schedule leaves much to be desired. In Riga, traffic jams are added to these problems. There is too little time left for workers, for their personal life, for rest, and for close people.

At the same time, we are told: for a normal healthy life, not only passive recreation, but also sport is needed. We are told this is not entertainment, but an urgent need. But even in this case, it turns out that in practice there is not enough time to realize such a need. An employee is constantly in a dilemma – either work, or rest… or work, or family… or work, or a healthy lifestyle…

What kind of healthy lifestyle is there, if the hired workers do not have enough time for a full eight-hour sleep? Chronic lack of sleep is a massive problem in Latvia. One need only look at these tired faces, sleepless eyes in the morning buses, near the factory walk-throughs!

The conclusion from all this is one – working time should be reduced!

How exactly should this be implemented?

Reduction of working time should be carried out with preservation of wages, that is, the monthly income of employees should not fall. This means that at the same time it is necessary to recalculate rates, tariffs, salaries.

Of course, the higher strata of society and their representatives will object to the reduction of the working week, invent different arguments.

To this answer the following. We are told that there is a brilliant technical progress in the world. Every day we read about robots, computers, 3D printers and the like. Obviously, this is said to emphasize the merits of capitalism. However, on the other hand, this suggests a disadvantageous conclusion for employers. Since labor productivity is constantly increasing and the need for human presence, manpower, is constantly decreasing, then people should have more free time. Why not shorten the working day? And it will be possible not only to passively rest, but also to develop, learn, take better care of children and the elderly. After all, participate in public life.

Secondly, we are told that there was an inefficient economy in Soviet Latvia. Consequently, after the establishment of capitalism, the economy had to become effective, which means that labor productivity in modern Latvia is quite high. If so, then the employee does not have to work from dawn to dusk like a horse!

The question of working time is not limited, of course, by the number of working hours and working days per week.

RFL believes that it is necessary to lower the retirement age. This is a favorite question of politicians: “How many pensioners are there per worker?” But pensioners are not the only dependents who the able-bodied and working population contains. Why do not take into account the number ofchildren in Latvia? Today, children are noticeably less than 30 years ago. Why do not take into account that many pensioners continue to work? Why do not they mention that the workers still contain state and municipal servants, who should be cut first?

The question of the length of working time concerns also the methodology for calculating the time worked. Latvia introduced the so-called total working time. What does this mean? Previously, the number of hours that an employee must work on one working day – 8 hours – was set. Overtime work was considered the time worked by an employee over 8 hours a day. In addition, overtime work was considered work on weekends.

Now the employer has received the right to take per unit of time not one day , but a much longer period – from one week to a whole year! Apparently, most often in modern Latvia a period of one month is chosen for calculating the accumulated time.

That is, the number of hours that the employee must work per month is calculated . If in a month, for example, 20 working days, then “totalized working time” will amount to 20 ∙ eight h = 160 h. And overtime work is now considered time worked over a monthly amount. This means that it is only at the end of the month that it is determined whether the employee is due for overtime work.

This is a complete disadvantage for the employee: consider in advance how much you should work. Consider yourself how many hours you have not worked, so that after a month you are not punished for the “unfinished” hours. The owners of the enterprises also purposely impede the work eight hours a day, removing shifts during the three-shift operation. The “debt” that has come over has to be worked out, including on weekends (and this is not considered as overtime).

Moreover, the employer can use the summed up working time in order not to care about the organization of the rhythmic work of the enterprise. Now it is not important for him that the worker regularly every day work out his daily time, his eight hours. There will be some downtime, one rush, because the owner of the enterprise on the basis of the current law can:

1) not to pay employees for days of downtime, since not every specific day is important, but the total time for a month,

2) when after idle time work appears, make it work more than 8 hours a day and seven days a week, and be able not to pay for this work as overtime, if the amount of hours does not exceed the normal monthly time.

This is the case with the duration of the working day in Latvia. And that's not all that needs changing. We have not yet mentioned the maximum allowable amount of overtime, and it also needs to be reduced. The next step should be an increase in paid vacation time.

It is not easy to achieve this, the entire state apparatus and all parliamentary parties without exception are on the side of employers. However, the majority of the population are not they, but wage workers.

The Workers' Front of Latvia supports public figures in their desire to reduce working hours and is ready to provide them with the necessary assistance.