Why Do They Decide for Us?

The government puts the Russian residents of Latvia before the fact: from now on, the school education will be conducted exclusively in Latvian, and not in the ratio of 60 to 40 as before. Children are different, and pedagogy is a complex science. It is difficult to study in general, and to study in a non-native language is two or three times more difficult. A man can never speak a foreign language as well as his own native language, but when studying mathematics, physics, chemistry, he will constantly stumble upon unfamiliar words, upon inability to express his thoughts. The same problem relates to Russian teachers, who are forced to descend to the level of elementary conversational speech in broken Latvian language in the presentation of their subject. In native language, a good teacher can give incomparably more to the children.

But let's put the question wider. Why does anybody decide for Russians living in Latvia in which language they should study? Who does this, why and by what right? The usual answer is: Latvians do this because they do not like Russians. But this answer is incorrect.

This is done by people who took over political power in the state. These people are not guided by the interests of the Latvian-speaking population, they are guided solely by their personal and group (class) interests. Both Latvians and Russians are among these people. What unites them is that they hold the power together and are engaged in systematic robbery of the state's population. In fact, they are not interested in the preservation of the Latvian language, nor about the Russian culture that “interferes with their life,” nor any other national issues. Forcing the interethnic squabbles between the ordinary people, artificially dividing them into two parts, the government fulfills its main task: it distracts people from social issues.

This does not in any way mean that one should not fight for Russian schools. On the contrary, fighting for Russian education, one must explain to people that the real struggle for improving the life of ordinary people should not be between Russian and Latvians, but between workers on the one hand and those who live on the workers' part on the other. 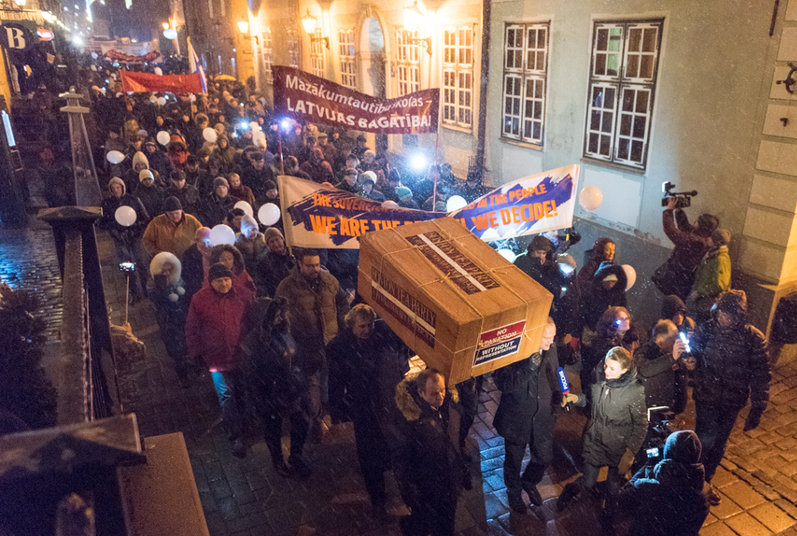 Paradoxical as it may seem, Latvians should join the struggle for Russian schools, if they really care about the fate of our country, because in the background of conversations about the language of study, the study itself catastrophically falls both in Russian and Latvian schools. And this is also included in the sphere of interests of the ruling class: it is easier to control uneducated, uncultured people, it is easier to fool their heads, it is easier to rob them.

The right of the inhabitants of Latvia to learn in their native language is enshrined in an international document, the framework convention for the protection of national minorities1, which, among other things, implies that Latvia “shall refrain from policies or practices aimed at assimilation of persons belonging to national minorities against their will and shall protect these persons from any action aimed at such assimilation”. Also Latvia shall “undertake to promote the conditions necessary for…” Russians in Latvia “to maintain and develop their culture, and to preserve the essential elements of their identity, namely their religion, language, traditions and cultural heritage.”