The class struggle is boiling and expanding, filling the streets of Riga, penetrating every corner of the Latvian province, responding at every enterprise, in every village, in huts and palaces.

This is not a picture of the 1905 revolution. This is our daily routine. The class struggle is not on the barricades. It occurs quietly in offices, commissions, board meetings, and chambers. This is not the proletariat pulling the cobblestones from the pavement. It is the bourgeoisie who is conducting a planned, everyday, under the law, attack on the rights of workers. Let us turn to the facts. This is how the working conditions of an employee have changed over the past quarter century.

What do we see? The working conditions of hired labor are continuously deteriorating. Whose benefit is this deterioration? Naturally, this is done in favor of the employer, that is, the owner of the capital.

How is this possible? We are said to be making technical progress. Automation is being introduced, machines come to the aid of physical labor. The digital economy, high-tech industries are developing at an accelerated pace. We read about it every day.

From this it follows that labor productivity is increasing, which means that people in general should live better: have more free time, develop, learn, care for their children and elderly parents. Participate in public life.

In fact, we are seeing a reverse process. In addition to the aforementioned points of deterioration in the position of the hired worker under labor legislation, it is possible to note a decrease in the requirements for accounting, establishing and controlling harmful and dangerous conditions and factors in the workplace.

Unions are now excluded from job appraisal. This question is left to the employers and bureaucrats of the state labor inspection. At the dawn of atmodes, the trade unions took away the right to dispose of a significant share of the social tax. From 36% to 90% of the social tax went through trade unions to kindergartens, nurseries, schools, pioneer camps, boarding houses, sanatoriums.

Does anyone remember that sick leave was paid from the first day of illness and in 100% volume? And food was paid to workers at night shifts, milk and juices were given free to workers in harmful occupations. And the social tax itself, by the way, was paid by the employer in that terrible totalitarian state.

With the advent of democracy, the tax burden began to shift to the worker. First in the amount of 1% of the salary. Further more. Today, we deduct 11% as a social tax from our salary. The employer is paying 24.09% for now, but voices are already heard that, say, one should pay equally, “in fairness”, 17.5% each.

In general, over the past quarter century, we have lost a huge number of social benefits. The basic necessities of life: housing, education, medicine, transportation from free or very cheap ones become the most significant share of the family’s monthly expenses, and the housing problem sometimes turns into a lifelong mortgage yoke.

Why is this happening?

The answer is simple: it's all about the organization. To promote their interests, the bourgeois are organized into numerous unions of industrialists and entrepreneurs, chambers of commerce and industry, confederations of employers and other associations.

Finally, all parliamentary parties in our country are bourgeois. The interests of those from whom they receive funding are close and dear to them. Even the parties positioning themselves as Social Democratic were not seen in counteracting the aforementioned process of worsening the conditions of the hired worker.

And they all persistently and persistently wage the class struggle of capital with difficulty. And, as we see, they are winning victory after victory.

Another thing is the working class. 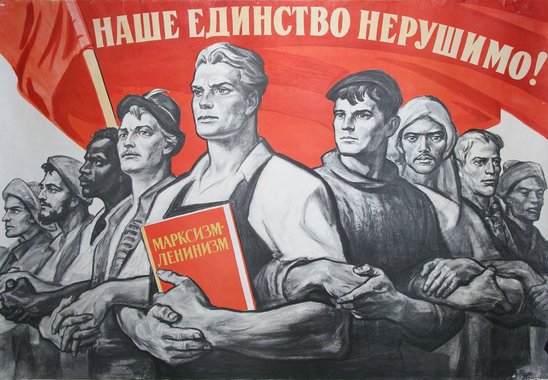 Once he was militant, muscular and cohesive. 100 years ago, he stubbornly won an 8-hour working day, the right to unite into unions, collective actions, and strikes. But, taking power, he put the state in defense of his interests, and the trade unions became more formal and bureaucratic.

Today the situation turned upside down. The bourgeois state is attacking the rights of the working people, but they have lost the habit of fighting, have lost their sense of collectivism - and therefore lose position after position.

Trade unions still exist, but they do not help much. On the one hand affects the passivity of the workers. On the other hand, many trade unions were overbought by the same bourgeoisie and stopped reflecting the interests of labor.

It got to the point that the Latvian branch trade union of builders is trying to push the law, allowing to pay salaries below the minimum established by law, and to reduce overtime pay from 100% to 50% (see postscript). Naturally, the builder does not need such a “defense”.

And if you look from the point of view of the whole society, is it profitable to raise the cost of labor and improve working conditions? Is the influx of cheap labor good? Does he develop business, does he increase business activity and is he not the engine of progress?

These questions can be answered quite definitely - no. Just the opposite. Cheap labor eliminates the incentive to develop, to introduce in the production of advanced technologies.

Why buy an excavator if you can hire a dozen or two utility workers with shovels? Why reinvent agricultural machinery, when there are crowds of people willing to engage in seasonal work on the stock exchange? Why, in the end, to raise education standards, if school graduates have to do low-skilled labor?

And one of the main social problems in Latvia today - depopulation - can be resolved only when the salaries and social guarantees of the working people rise to a level that ensures a decent life.

Cheaper labor is the path to degradation. And while we are confidently walking this path.

Therefore, it is foolish for a competent worker, a patriot of his country, to hope for bourgeois power, for the next promises of newly baked parties.

Protection of the interests of labor should be taken into their own hands.

And first of all, it is necessary to organize your trade unions from below, choose your representatives who can be fully trusted, and seek collective bargains that are beneficial for employees.

And for this you need to be ready to go to the end, defending your interests up to the strike, as the last and most effective argument of the employee.

This is a civilized, legitimate way to fight for the rights of workers. He is somewhat forgotten, but today is the time to remember him.

With the continuing trends in the development of the relationship between labor and capital, this experience will sooner or later have to turn. Life will force.

P. S. While this article was being written, the legislator “pleased” with the news. The Seimas Commission approved another deterioration in the status of workers.

Payment for overtime hours will now be made not in double, but only in one-and-a-half amount, and for night hours, they will not pay extra 50% but 25% of the daily rate. While the workers are inactive, the bourgeoisie continues its class struggle.

If someone is tired of retreating and succumbing, if someone has decided to defend their labor rights, contact the Workers' Front of Latvia. Not yet translated into Latvian land, people who can advise you on labor issues, help in the conclusion of a collective labor contract and in the organization of the trade union in the enterprise.